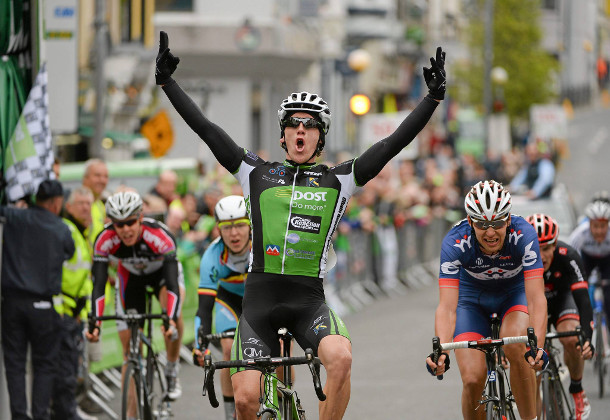 With the weather holding out throughout the day the relatively flat stage once again saw the average speed close to 30mph. CRC sponsored riders Sam Bennett and Ronan McLaughlin quickly formed a breakaway group of 12 launching the first attack of the day.

At 60km, the breakaway group was caught with more attacks following none of which were successful. With just less than 40km to go, the lead and chasing groups merged, forming a front bunch of 40+ riders including the yellow jersey . Archbold attacked from the chasing group, breaking away along with Samuel Harrison (Great Britain National Team), Rasmus Guldhammer (Denmark Blue Water Cycling) and Lars Vierbergen (Holland Koga Cycling).

“I’m thrilled with the win. I was injured at the start of the year and haven’t had too much racing with the way the injury fell but my form has come good. I spent the last three weeks in Holland getting into good shape so it seems to have paid off. It was a great team effort today. We missed the vital breakaway yesterday so we were disappointed about that and made sure we had two riders in every breakaway today. Thankfully it worked and we’ll just keep on focusing on stage wins for the rest of the week”