On Thursday 25th July the team of PMR@ToachimHouse/Vitus made their way down to Newnham Park, Plymouth in preparation for the Bontrager Twentyfour12. 12 riders, 3 teams, 12 hrs of racing was to be had on Saturday. Pitch marked out, Chain Reaction Cycles gazebo and feather flags installed, generator fired up and mechanics pit all set up waiting for the arrival of the last few team members. The team had 2 mixed teams consisting of Gemma Collins, Nick Collins, Harry Godding & Jack Finch Sophia Joy, Craig Joy, Danielle Petersmann & team manager Paul Morton And a male open team consisting of Nick Baxter, Neil Lomax, Joe Godding & Matt Osborne Team mechanic was TT manager Tom Morton
A real family affair with husband and wife, brothers, brother & sister and father & son in the make up of the teams. 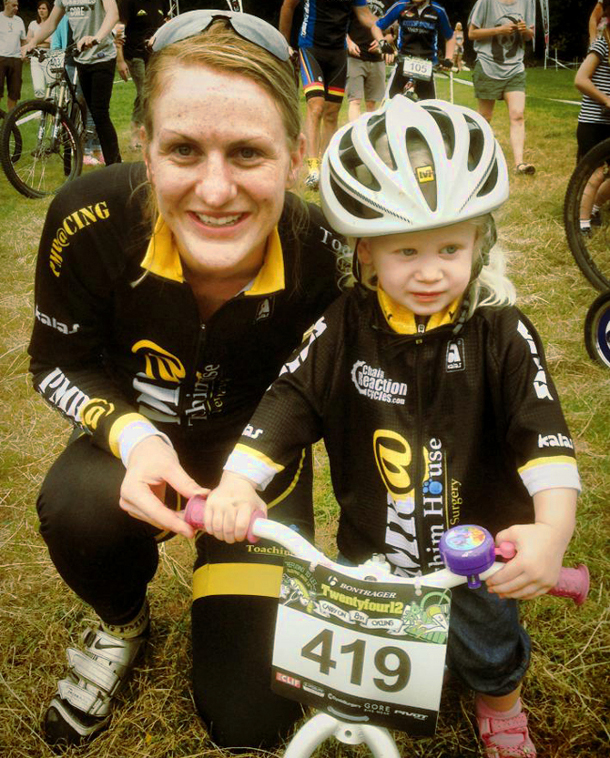 The first riders off where Willow Collins (2yrs old) and Emily Morton (9yrs) in the 12 minute race. Great to see the kids racing just before the main event. This is just one of the reasons we go every year to this event, a really great atmosphere and some fantastic racing.

12:00 Saturday came around quickly and Jack Finch, Craig Joy & Nick Baxter all took to the start line to start off our mission to podium by midnight.
It all started well and after 4 hours the team led by Nick Collins were 10 mins up on out nearest rivals. Unfortunately we were docked 1 lap for a bike change outside of the transition area. This put put us back into 3rd place and really got the team on the back foot. It must have made them step it up again as within that team Gemma Collins set the fastest female time on the clif climb, Nick Collins set the fastest lap for the entire weekend and took the overall KOM for the same climb with Harry Godding only 1 second behind him! They chased hard and managed to get the lap back and finished within 4 mins of the overall winners settling for 2nd place on the podium.
The male open team where having their own battle switching from 2nd to 3rd place several times and it only took a mechanical for Joe Godding for the 2nd place to drift away and they stood very proudly not he 3rd step of the podium just behind Pivot & Torq.

The other mixed team with MTB manager Morts in the line up did a valiant effort coming in 5th place overall. Not bad considering Morts weighs the same as Craig & Sophia Joy combined! Sophia lost nearly 20 mins during 1 lap with a puncture and then her chain slipping and getting stuck, meaning she had to go into cyclocross mode and run with her bike on her back for nearly 2 miles !

A massive thanks has to be given to our sponsors Vitus Bikes and Chain Reaction who just 48 hours before had sent us last minute mech hangers and spare rear mechs for the bikes they kindly supply to the team.
The bikes were absolutely made for XC racing, proven by Nick Collins setting the fastest lap, some may say it’s not about the bike, but we disagree when it comes to the Vitus Rapide 29er.
A brilliant weekend had by all involved and although we said this would be the last year we did this race, I know we will be back to get that top step we should have had this year. Roll on 2014 because PMR@ToachimHouse/Vitus is only going to get faster (and slimmer for some).