McKee misses out on being “King of Cong”

Co. Down based Chain Reaction Cycles / VITUS rider has a promising start to the 2013 season. 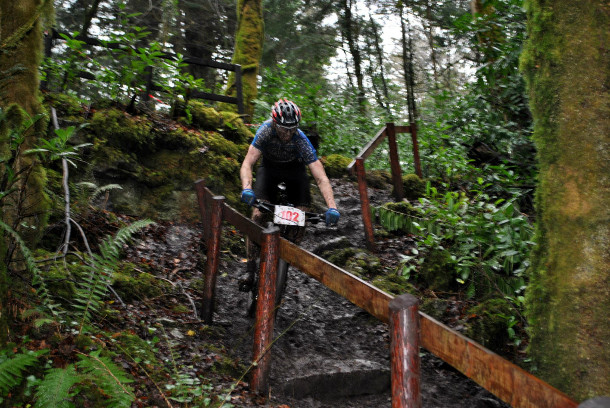 Whilst he had been drafted in to join fellow team-mates on the road at the P&O Tour of the North, sadly the event was cancelled due to the adverse weather and heavy snow drifts across Northern Ireland earlier this month. Undeterred (but a little disappointed) Gareth has continued to post some quality results over the last few weeks at the Ulster and Irish NPS series.

“My first proper race this year was the opening round of the Ulster NPS at Ballykelly Forest. The race started off well and after a good warm up before the start, I took off well – leading into first single track. My plan was to keep a steady pace that I would be able sustain over race distance, however half way through the first lap I got passed by Matt (Adair) and Roger (Aiken). I was unable to keep the pace that they were setting so dropped back and got into my rhythm but I just couldn’t keep up with the guys. I managed to finish 2nd when Roger pulled out with mechanical problems. For the first race back I’m happy with the result.”

Last weekend I headed to Cong in Co. Mayo for the 1st Irish NPS. After walking the track on Saturday it was clear that it was going to be very tough in the slippery conditions. The weather was poor and with some of the features it was evident that it wasn’t going to be an easy day out!

As I got up on Sunday morning, there had been more rain and it continued all morning. I headed out on practise lap and it was clear that carrying speed through the mud would be key to the race. The VITUS Rapide 29er was sure to be an ideal weapon!

Off the start and the pace was fast. Three of us formed a leading group and managed to stay together for a lap however I started to lose contact half way into the second lap but held the gap at 30 seconds. I was still feeling strong as the race went on and my lap times were consistent. I could see that Robin Seymour was starting to pull away from Matt Adair and Peter Buggle was coming up from behind pretty fast, I knew it was time to keep the intensity high.

I pulled a gap on Buggle and started catching Matt, passing him on the 3rd lap. Robin was about one minute ahead so I pushed hard to try and catch him – but to no avail Finishing 2nd to the National Champion was a good achievement for the first round of the NPS.

I’m looking forward to the next round of the NPS in Killarney and spending many more hours on my Vitus Rapide .. the move to “Big Wheels” has been great!