Vitus Bikes rider Matti Adair took part in the first round of the British XC Mountain Bike Series last weekend at Sherwood Pines, East Midlands. It was a disappointing start to the British race season, as Matti explains below:

Vitus Bikes rider Matti Adair took part in the first round of the British XC Mountain Bike Series last weekend at Sherwood Pines, East Midlands. It was a disappointing start to the British race season, as Matti explains below:

This weekend was the first British race of the season in Sherwood Pines, East Midlands.

An early morning was called for on Saturday morning as we made our way to Dublin to catch the ferry. We arrived at the course about 4pm to see what the conditions were like, and as I headed around the course I saw it was very fast with lots of smooth fireroad and short technical sections.

I knew the course wasn’t suited to me but I was still looking forward to the race with dry conditions.

I was placed on the third row of the starting grid with around 20 riders in front of me, but as we moved up to the start line I managed to get a space on the second row.

From the start, the rider in front of me started slowly and as a small gap opened I squeezed past and managed to make up a few places. Going into the first few corners I made up more places and went into the first long fireroad in third position, but on the next fireroad stretches the other riders gained on me and a group of six formed.

This group split again in the first technical section – I was in the second group and pushed hard to try and catch up but I couldn’t, and so we stayed in the group in the first lap with a gap of 30 seconds to the leading group.

On such a fast course it was important to keep drinking and taking gels, but as I came into the first feed zone I was about to grab my bottle when another rider jumped out in front of me – which meant I had to swerve and miss my bottle.

As I continued to push on, our group continued to make up ground on the leading group, but halfway through the second lap I began to lose contact with my group because I wasn’t drinking and taking on any fuel. Coming into the third lap I got my bottle and took the gel with it.

By this time another Junior had caught up and we pushed hard through the next two laps, where we began to catch the first group.  I tried unsuccessfully to lose my group partner, but it eventually went down to a sprint finish, where I took sixth place.

Overall I was disappointed with how my race went, but hopefully I can improve my result in the next race. 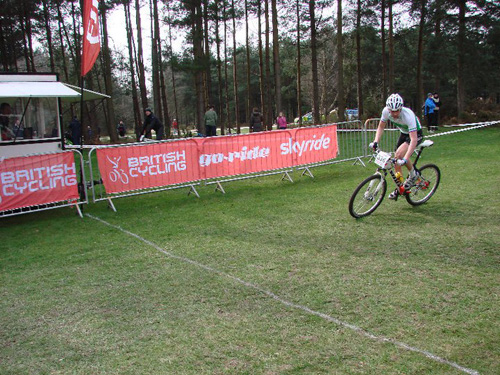