Here’s Matti’s report from the weekend:
“So it’s the morning after the day before and I’m meant to be riding some track but the list of sore body parts is too long today – legs, hip, neck, back, shoulders, arms and hands but was it worth it? Yeah of course! A first Senior National Champs and my first Senior National medal makes for a happy Matthew.

So anyway, the morning of the race I got up – which is always a good place to start – had food and hit the road. The first practice lap was great; it was fast, technical dry and muddy – it had everything, so yeah I was looking forward to racing. 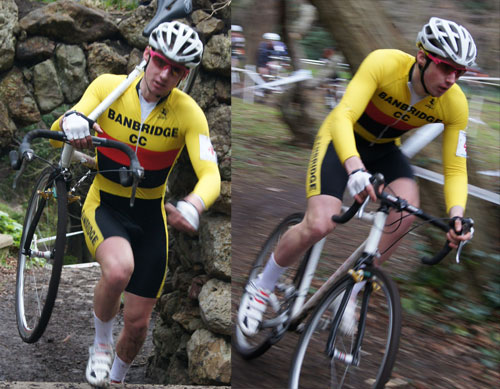 So on to the nine-lap race (wow, nine laps sounded like a lot). With a long straight tarmac start I don’t really need to say what I did but for those that don’t know me I went flat out and usually half way through the first lap I would get caught but not this time. I was leading for a whole lap and coming down the finish straight I even had a gap! Wow this was going well. I had a five second gap then boom – the corner I nearly fell off on every practice lap I did fall off – disaster! But the crash only really sped up the inevitable when Roger (Aiken) and Robin (Seymour) came flying past.

I stayed with them for a while until Roger’s chain came off, at which point Robin went into the lead, closely chased by Roger leaving me on my own. By this point I was more worried about putting time into Evan (Ryan) than trying to catch the other two so I rode as hard as I could (this was the Champs after all) so it worked out pretty well for me finishing third.
Robin won with Roger in second place. WORC won the team prize (who shouted fix back there?).”