Vitus rider Matti Adair won the first round of the Scottish XC Series at Kirroughtree over the weekend, following his hat-trick of wins at the XMTB Spring League in Belfast.

Vitus rider Matti Adair won the first round of the Scottish XC Series at Kirroughtree over the weekend, following his hat-trick of wins at the XMTB Spring League in Belfast. 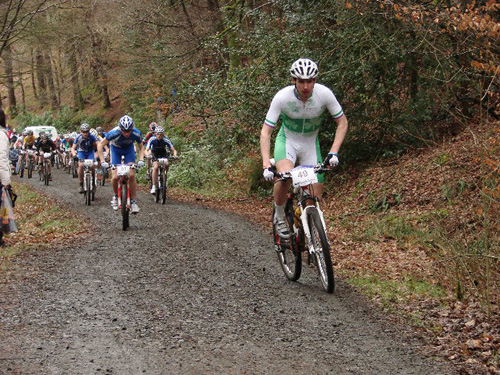 This weekend was the first round of the Scottish XC Series at the popular trail centre of Kirroughtree.

I was looking forward to the race after the Spring League and was feeling good for the race. During practice on Saturday the course was dry and fast, and I was looking forward to a fast, dry race. However, on Sunday I was woken by the sound of rain on the window. The rain continued throughout the morning, stopping just before the first race got under way.

As the first riders came around, I could see it was very muddy – most of the technical sections were on the man-made trails so the rain didn’t affect them too much, but on the natural sections the trail cut up badly and became very difficult to ride. One climbing section became impossible to ride, and it was quicker to run up it.

With my Junior race being only three laps, my aim was to go fast from the start. So from the off I started fast and got a gap of around five seconds at the first section of singletrack over a small chasing group that had formed behind.

After this section of singletrack a steep hill followed which I used this to increase my lead over the chasing group. By the end of the first lap I had built a gap of 20 seconds, and headed into the second lap with better knowledge of the course, having not done a practice lap in the morning. I used this to my advantage and by the end of the second lap the gap to second had grown to a minute and a half. I continued to push hard into the third and final lap, and finished the race with a lead of two minutes over second place.

It was a good start to the main racing season and I’m looking forward to the first British NPS race in Sherwood Pines this weekend – which hopefully will be dryer than this race.