Stage one
Stage one was a short 30-miler starting at 7pm. Having taken the previous week of because of the cold I was unsure how I would go. The stage was fast from the very start with the average speed of over 25mph in the tough hilly roads. I was mainly at the front of the field but soon started to suffer and slide back. However, I stayed and finished in the bunch after having to go onto the footpath to avoid a crash in the final 200 metres. 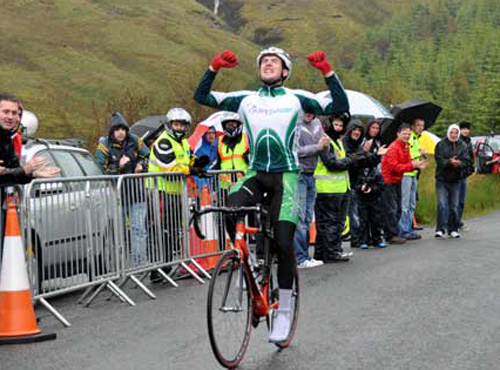 Stage two
Stage two was a short time trial of just over two miles but it was more of a hill climb than anything else. I was targeting this stage as one I could do well in, and was feeling much better than the previous night’s stage as it got me ‘going again’ after a week off the bike.
After a short warm up on the turbo I was standing in the start house ready to go. I tried to save a bit during the flatter lower section of the course before hitting the 18% climb to the finish – I finished shattered but was happy with my performance. When I got back down I was told at that point I was the only rider to go under the seven-minute mark and was in the lead. However, of only three other riders to go under seven minutes I was second on the stage and second overall in the general classification going into the afternoon stage.

Stage three
Stage three was a hilly 50-mile stage which I went into with the added pressure of being second overall, with just over 50 seconds down on the yellow jersey. I tried to stay at the front of the bunch and follow the yellow jersey as well as trying a few attacks which went nowhere, but with all of this I forgot to eat enough solid food and with 12 miles to go I was starting to cramp up with the effort of the morning’s time trial catching up on me.

With six miles to go I struggled over the final King of the Hill only for an attack to go down the other side which I couldn’t go with. After losing contact with the group I rode the last few miles on my own and crossed the line shattered and bitterly disappointed. I went from second overall to 64th in one stage.

Stage four
Stage four was another stage I had targeted to do well, and it was by far the hardest stage of the race with four King of the Hills to be contested – one of which was the final climb up Glengesh Mountain with maximum gradients of 20%.

The race started quickly again with the first King of the Hills within the first two miles of racing. The torrential rain made the roads dangerous and many corners were taken very slowly. 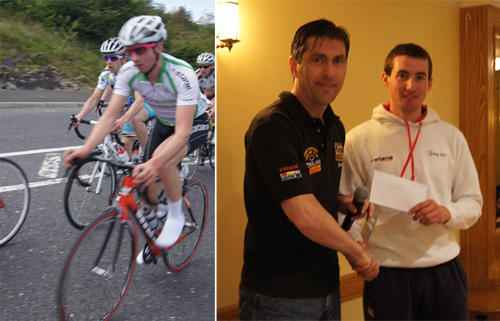 With our team-mate in second overall we were made to work hard after the yellow jersey attacked and we had to chase him down. A break of around five riders eventually went clean and got around a minute on the bunch, and when the bunch slowed down I attacked alone and went solo in an attempt to ride across to the breakaway. I caught two riders who had dropped from the breakaway and we worked together. The yellow jersey then caught us and with the added rider power we soon joined the breakaway about 15 miles from the foot of Glengesh with two minutes over the main group.

At the foot of Glengesh we had a 1min 30 gap over the group, and I attacked and quickly got a gap of 100 metres with 700 metres to go. I pushed hard and went into the last 100 metres with the same gap and in the last 50 metres I knew I had won the stage, which more than made up for the disappointment of the previous day. Along with the stage win I picked up eight King of the Hill points, taking me into fourth overall in the Mountains category.

I ended up 23rd overall on general classification so I was happy enough with my performance.