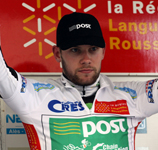 Following his amazing performance on Day One of the Etoile de Bessèges in France, An Post – CRC new signing Marcus Christie stayed out of trouble to move up 5th place in GC and take possession of the U23 classification leader’s jersey yesterday.
Finishing in the bunch on stage 2 – 149km from Nîmes to Saint-Ambroix – which was won in a mass sprint by French speedster Nacer Bouhanni (FDJ.fr), Christie had another successful day in the saddle and is now sitting just16 seconds down on race leader Sander Helven ( Topsport Vlaanderen-Baloise)

Stage Two saw a five-man escape go clear at 30km. It featured Julien Fouchard (Cofidis), Dimitri Le Boulch (BigMat-Auber 93), Axel Domont (AG2R La Mondiale), Thomas Rostollan (La Pomme Marseille 13) and Clément Koretzky (Bretagne-Séché Environnement).
Gaining a lead of four minutes at one stage; that gap was halved by the time they got to the finishing circuit of 7.3km to be negotiated five times. With the sprinters’ teams and that of the yellow jersey on the front and the gap tumbling, those out from began attacking each other.
Rostollan emerged the strongest of the escape and made a brave solo bid for glory. His fellow escapees were caught on the fourth of the five finishing loops before the lone leader was caught on the last lap, paving the way for the bunch sprint.
Christie was tucked up safely in the group – as were his Irish team mates Jack Wilson and Conor Dunne. The other Irish An Post-CRC rider in the race, Ryan Mullen lost 1:13.
The flying Christie will now focus on looking after himself over the next two stages, hopeful of losing no time to his general classification rivals, or at least keeping any losses to a minimum. He then has an 11km time trial stage to look forward to on the last day of the UCI ranked 2.1 race on Sunday.
And having ripped up the time trial scene at home last year and gained selection for the U23 time trial at the World Championships in Florence last September, he knows he is capable of something very special if he can stay incident free and in the mix for the next two stages.