Stamullen GP – 15/04/2012
The race consisted of six laps of a 12 mile circuit with a short but steep climb at the start of each lap. There were plenty of big names on the start list and attacks went from the gun. Conor got away in the first breakaway group but it was too early in the race with everyone still fresh so the bunch reeled them in before another group got clear coming into the end of the first lap. I jumped across to this group and we got clear of the bunch.
The 12 of us in the break worked hard to pull out a gap of about a minute back to the bunch and this is how it remained until the final laps. With one lap to go, there was a chase group just 30 seconds behind and this is when the attacks started. Five riders managed to pull clear on the climb and I was in a group of three chasing, but they started to open up the gap after the climb so it was now a case of trying to stay ahead of the group behind. We got caught by the chase group which included Conor with half a lap to go but it was still a small group and everyone was struggling so there was still hope of getting a result.
With one kilometer to go I attacked the group and opened a gap which I held until the finish to take sixth place while Conor won the sprint behind to take seventh. This was a great race to compete in with a good crowd of people in the small village of Stamullen who shouted encouragement each lap which really kept the motivation high.
Results
1 Mark Dowling, DID Dunboyne – 2hr:50:12
2 Fiachra O’Mhuire, DID Dunboyne
3 Ryan Sherlock, Cycleways
4 Greg Swinand, Usher IRC
5 David Wherity, Stamullen M Donnelly
6 Leo McAllister, Chain Reaction Cycles Vitus
7 Conor McAllister, Chain Reaction Cycles Vitus
8 David Peelo, Murphy Surveys 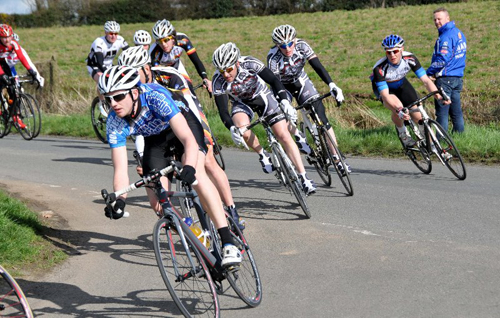 John Beggs Memorial Race Report – 28/04/12
This is always a great race on a very testing circuit with plenty of hills to split up the field and 70 miles to cover over seven laps of the course. I started in the A2 group just 30 seconds in front of the A1’s. After the first hill on the circuit just three of the A1’s bridged the gap to my group and the pace was kept high by the professionals from the An Post team. After the second lap the attacks started and after an all-out effort up one of the climbs I managed to make the front group of seven. The aggressive racing continued as the group split again halfway through to make a group of five of us at the front.
The course began to take its toll and I lost contact on the fourth lap. I got caught by the next group but recovered quickly and made a breakaway with a group of three with just two laps to go, staying clear until the finish to take sixth place. The points secured were enough to move up to A1 category so it was definitely a successful day and great to be up there for a while with the pros.
Conor fought his way back up from the A1 group and managed to take a ninth place finish.
Results
1. Roan McLaughlin (Sean Kelly An Post)
2. Sean Downey (Sean Kelly An Post)
3. Roger Aiken (Banbridge CC)
4. Connor McConvey (Sean Kelly An Post)
5. David Wherity (Stamullen)
6. Leo McAllister (Chain Reaction Vitus)
7. Javan Nulty (Dunboyne CC) (1st Unplaced A2)
8. Craig Sweetman (Stamullen)
9. Conor McAllister (Chain Reaction Vitus)
10. Marc Potts (Omagh Wheelers)
11. Gavin Magowan (Dromara CC) (1st Unplaced A3)
12. Thomas Martin (Eurocycles)