The An Post – Chain Reaction team line up at the Three Days of De Panne at the Belgian coastal town of Middelkerke in West Flanders. The 545km race takes in four stages culminating in an individual time trial on Thursday in De Panne. 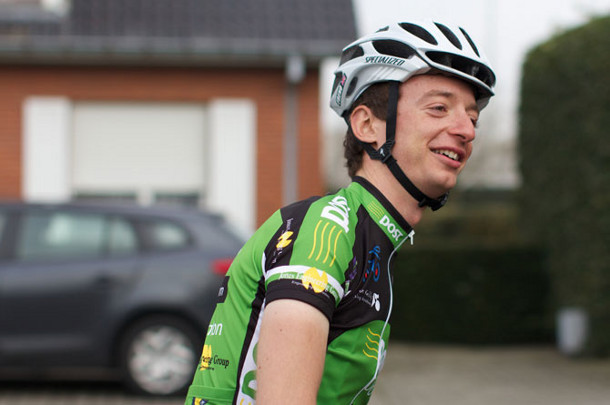 Sitting this mid-week race out is newcomer to the team Kieran Frend, who we are pleased to welcome to An Post – Chain Reaction this season through the Bradley Wiggins Foundation.

Team manager Kurt Bogaerts believes the team’s program will benefit a rider of Frend’s physique:
“Kieran is an excellent up and coming rider and I am very happy he has decided to join the team. I have watched him compete several times and he was also recommended to me by Daniel Lloyd who raced with us in 2008.

“His climbing physique is naturally more suited to hilly races so I think our program will be a good match for him. He will get more opportunities to test himself against the best riders in the world and this is definitely something that will help him develop as a rider.”

We spoke to Kieran about his aims for the upcoming season, and receiving backing from last year’s Tour de France winner…

It's your first year with An Post and you're backed by the Bradley Wiggins Foundation, how did that come about?
I was introduced to Brad a few years back when I was supposed to start a contract with a French based team, it all fell through at the last minute and it looked like I wasn't going to have a ride. I didn't really know what I was going to do and then Brad said to find a place on a team and that he would look after me. He'd been thinking about starting the Foundation for a while as a way to put back into the sport that has given him so much and it just so happened that I was the first rider to be a part of it.

For as long as we've been friends I've known he was in a position to help me but I'd never cross the line and I never asked him for anything. He doesn't really shout about it (the Foundation) and I think that speaks volumes as to his ethos behind supporting riders like myself. He's using where he is, and what he is to help riders like myself. They might not do what he's done, or be as successful but Brad just doesn't want to see anyone who wants to try not being in a position to try.

2013 will see an affiliation with the whole team not just you as a rider
Yes, it's great obviously that Brad is supporting me but to have a link with the whole team is a real honour. When Brad asked me what team I'd like to be a part of, An Post- Chain Reaction was at the top of the list as I think it’s right up there with the British and Oz academies in terms of turning people on to world tour teams. This team really is the best in the business for that stepping stone and is highly regarded for its development over the years.

Do you have much time with Brad?
Yes, we're in contact regularly. I spend some time training out in Mallorca with him a few weeks ago. It's strange as the impact that he has isn't as direct as what many people think; it's very like Sean's role here in this team. For me it's about having those people like Brad and Sean believe in you, it's not about small things like 'how' to ride. Brad certainly cares it’s not just something on the side for him; it's a project that he wants to get stuck in to.

What does this season hold for you?
I didn't get to do the Tour of Britain last year as our calendar at Node-4 was a little sparse. That ultimately reflected that you can't get results if you're not at races! The set-up this year with An Post – Chain Reaction is a massive bonus for me. I'd be keen to get back over to Ireland and do the Ras as I've never raced in Ireland and finished outside the top ten. I like the aggressive racing in Ireland as you can fight for position and the nature of the roads means that you're rewarded for your efforts. It'd be nice to get onto home roads in 2013 for the Tour of Britain; I think it's time I started there. It’s certainly an end of season goal and be in our starting line-up.

What are your goals with An Post?
I think we all have ambitions for the team and individually. For me, this year’s about looking after the things that I can control and working as hard as I can to be at my best. I'd be more than happy to stay with An Post-CRC for a while as I honestly don't think there are any better sideways options. The only move would be Worlds or Pro Conti level. I'd actually argue that we have a Pro-Continental calendar which surpasses some of the teams that have those licenses this season.