An Post – Chain Reaction rider Wout Franssen claimed the first Pro victory for the team at last weekend’s Pro Race in Houthalen, Belgium. With just over 10km to go to the line, Franssen lead a break of four riders into the final section. Feeling strong Wout went on to successfully out-sprint his fellow escapees to take the win.

Sunday also saw a strong result for the team with Alphonse Vermote taking 8th in Rund um Koln (UCI 1.1). He commented “It was a hard race today but I am feeling good and my form is coming back again!”
The team will now focus on its’ homecoming race, the An Post Ras with team manager Kurt Bogaerts naming the provisional An Post-Chainreaction team last Friday. Irish stars Sam Bennett, Ronan McLaughlin and Sean Downey are all part of the provisional line-up and despite making a great impression in his first year with the team, ex CRC employee Jack Wilson is being held back from the race this year to allow him develop. 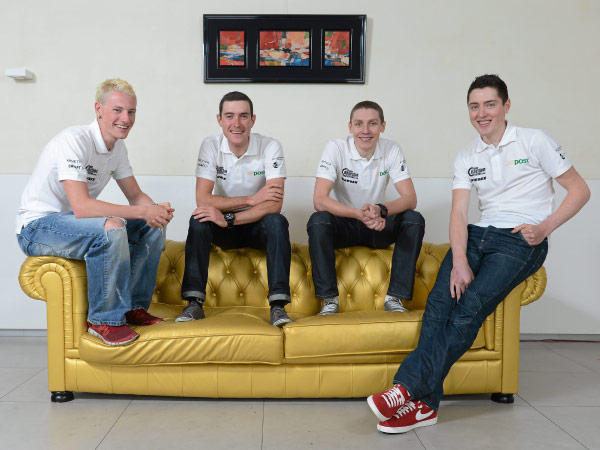 The team has won the Ras outright two times in recent years; with Stephen Gallagher in 2008 and Gediminas Bagdonas in 2011 and will be out to repeat that and take some stage wins says Bogaerts
“We will make the final selection based on the outcome of the Rund um Koln in Germany,” Bogaerts said.
“Normally the three Irish riders will be part of the squad, though. Sean Downey is coming into shape, finishing fifth in the Circuit de Wallonie. That finished on a really steep climb like Seskin Hill and you cannot hide on a course like that, you need really good legs. So I’m pleased with his form.”
He continued “I think the team is more suited to taking stage wins, but I wouldn’t rule the overall out. The best approach is that we will concentrate on stages and on trying to be on the podium as much as possible. The general classification could then take care of itself after that.”
Race director Tony Campbell is keen to see how the team performs.
“The An Post riders always give everything to ride well, and have had some very good results in the past with two overall victories and numerous stages. We know they will be highly motivated to ride well, and they should have a very big effect on the overall and stage results.”