Cambridge University came away from the British Universities (BUCS) Road Race Championships with a silver medal despite the three Cambridge University riders in the race enduring a day where luck seemed to be against them. Nevertheless, fantastic performances by Edmund bradbury, James Dixon and Will Sloper meant we were still able to bring home a result.

Saturday was the kind of day where we could have really used some luck, already on the back-foot and being outnumbered 10 to 3 by Loughborough, a result was always going to be hard to come by. However, things refused to go smoothly for us and had it not been for all of the guys riding out of their skins we would have probably left empty handed. A massive crash after only a couple of miles took out or delayed almost half the field, with our main domestique for the day James Dixon caught behind it. James ended up having to solo for 20 mins in order to regain the lead group. 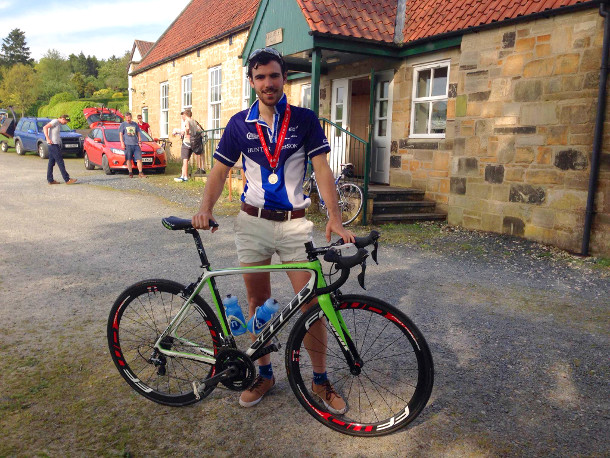 The next bit of misfortune was of our own making: we missed an initial 4-man break which included one of Loughborough’s biggest threats in Sandy King and former CUCC rider Andy Nichols (now at Sheffield). Will Sloper was promptly dispatched to a 6-man chase group that formed shortly afterwards, and by the fourth time up the “hill” the two breaks had merged, meaning we were represented at the front of the race – disaster averted. The 10-man break now had a lead of nearly 2 minutes, with Will looking very comfortable up the hill each lap. Seeing as Sloper is our fastest finisher and that Loughborough only had one man in the move we were pretty confident about the situation and happy to let it play out.

This all changed a couple of laps later when Will suffered a puncture. With only one service car, located behind the main group, this effectively ended Will’s race. We were now left without anyone in the 9-man break with just over a minute’s gap up the road. With Loughborough policing the front of the bunch it was always going to be a big ask for Edmund to get away, let alone get across the gap to the break. However, this is exactly what he did, blasting off the front of the bunch and crossing to the break solo within a single 13.5km lap. Once there Edmund proceeded to drive the break hard up the hill each lap reducing the group to 5 riders by the final climb, while James Dixon fought hard back in the bunch to defend his team-mate’s lead.

A lack of willingness from the rest of the break to cooperate after the final climb and a massive injection of pace from some riders in the remains of bunch within the final half lap saw a number of groups merge within the final kilometer of the race. This left the race to be decided by a sprint from a group of around 15 riders. Despite his efforts in the break Edmund was able to take second in the sprint and claim the silver medal. James Dixon finished 14th, a very creditable result in his first proper road race, especially considering the amount of effort he put in on the team’s behalf.