Kyle Houston reports on his most recent race performances at the Bobby Crilly and National Championships.

Kyle Houston reports on his most recent race performances at the Bobby Crilly and National Championships.

Team Chain Reaction Cycles/Vitus were formed at the start of 2012, and the fledgling road team are riding in various British and Irish races throughout this season on board our brand new Vitus road bikes.

The Bobby Crilly always attracts the hardy and adventurous as the ardous final climb up Divis represents one of the only true mountain top finishes to a race in Ireland, with nearly 10km of climbing from when you turn off the final lap. For me it was always going to be something of a baptism of fire following my crash at the Ras http://www.chainreactionhub.com/road/179-crc-vitus-at-theras-dhun-na-ngall. That week I had been given the ok to head back to competition by the physio all be it on a light basis (My enthusiasm got the better of me entering this race and I found myself in the rain-soaked car park getting changed). My Sean Kelly Limited Edition frame was attracting plenty of attention at the start line and it was good to be back among the small community that is the racing fraternity. 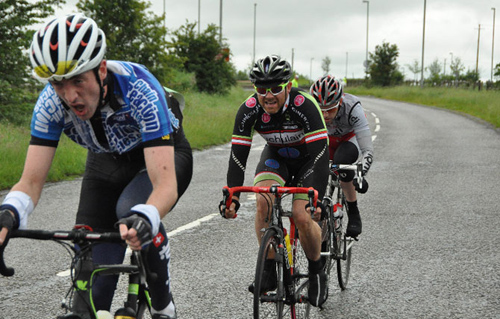 After three weeks of no training and no racing under strict doctor’s orders to deal with the head trauma and a subsequent chest infection I had incurred, you can be lulled into a false sense of security. I knew I would have lost some fitness but my legs would be fresh from the rest. Very quickly the old instincts were coming out – I couldn’t resist that wheel in front of me and found myself going in attacks and try to get into breaks. Initially I got into a break with Gary Cranston and Colm Quinn. We were working well together but I was really struggling with my breathing and on the hills. To coin an old cycling phrase, ‘my legs were handing out cheques my body couldn’t cash’. Eventually I was dropped out of the break and returned to the bunch fighting my way round the remaining lap where the organisers had included a nasty little kick up in the road of about 500m of really steep narrow road. I found myself fighting to stay in contact over this last drag and eventually lost contact with the main bunch riding my own rhythm up the final climb, pleased to be back racing having given a good account of myself but realising just how much work I had to do to get back to fitness.
National Championships
This is a race I have wanted to do for a long time. The prospect of rubbing shoulders with those going off to the Tour de France the following week and hopefully putting them under a bit of pressure was just too much to resist. It was always going to be a big ask to step back up to that level following my crash and the limited amount of training I was going to be able to get in but I could not be dissuaded from the task, and who knows in racing anything can happen…..
I arrived down the night before to a rain soaked Clonmel some 200 miles from Belfast and a 3.5hr drive hoping the weather would improve for the following day. I had checked into a local hotel and was pleasantly surprised to find the hotel had its own dog to give that extra home from home touch! Following a massive feed it was off to bed early for the fun and games that laid ahead (not that I slept that well with the excitement and nerves). I woke up to a clear blue sky and temperatures of around 16 degrees at seven in the morning! Today was going to be a good one!

I found the sign on in a local bar and had some friendly banter with commissaire Jack Watson about my license photograph. Martyn Irvine was signing on just in front of me – he was later asked at the start line interview if wearing a skinsuit and aero helmet gave any indication of his intentions. He said: “That was just to help him get over the speed ramp on the main street and after that he would see how it went!” Always good to be in the company of people like this that are heading off to the Olympics.
As I was warming up I noticed Nicolas Roche behind me and wondered what the etiquette in this situation should be… alas I found myself on the start line in 24 degree heat making Clonmel look more like something from a postcard in Italy than somewhere in Ireland! From the gun it was fast and furious racing and I was really aware that this sort of race splits up early and I didn’t want to be caught out behind some slower riders so I was constantly pushing my way forward. 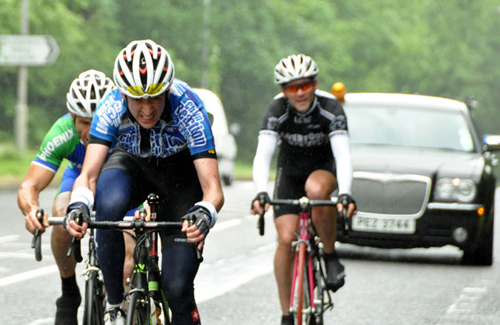 After the first climb on the flat section of the course I found myself in a move with Adam Armstrong, Mark Dowling, Nicolas Roche and a few others and was like, ‘this is it’. It’s always a good feeling to be sitting second wheel to someone who came 11th in the TDF! Coming into the second lap Nicolas, who had missed the initial move by Matt Bremier and Phil Lavery, decided this was his chance to close the gap down – I was on his wheel going into the climb as he attacked. Obviously that’s not a wheel you want to let go but in hindsight that would probably have been a better thing to do. Half way up the climb my lights went out and I found myself slipping back through the bunch like I was a bollard in the road. My race was over. I was gutted…
As I rolled around I noticed a few others who had suffered a similar fate as myself and this made me feel not quite as bad, it had after all been a great experience and what a privilege to be able to race against these guys and to be able to put your mark on the race. It’s easy to get weighed down by the result but so many people can never even dream of doing what I did so once I had dealt with my wounded pride, I got changed and settled in to watch Matt Bremier take a well-fought three title on the trot with Martyn Irvine making a brave move in the last 20km in a solo bid for glory. Nicolas Roche came in second and it looked like even he had a hard day.