With the weight on his shoulders of being a “pre-race favourite” Vitus Bikes Pro Ryan Mullen lined up for last night’s national time trial championships hoping to blast his way to a victory in the damp conditions. 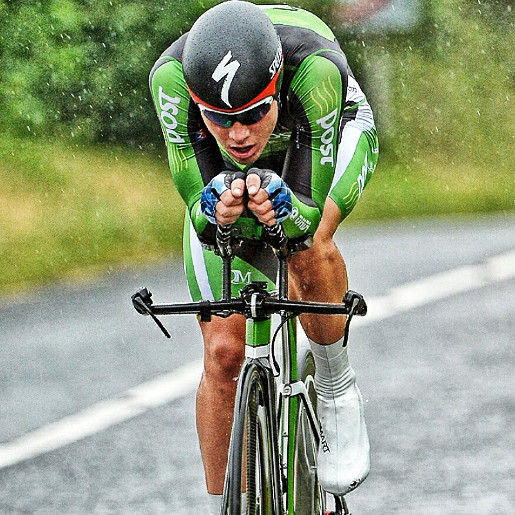 What transpired was an incredible piece of riding from the U23 to see him take the win by a margin of 46 seconds over defending ELITE champion Michael Hutchinson in the title race.

“I thought it would be pretty tight between myself and Michael,” said Mullen afterwards.

“I’ve done a good bit of work on the time trial bike in the last few weeks. I’ve had it out in Majorca and I got my position sorted out properly. I’ve also upgraded a few parts on it so I’m quite happy.
“But I’m a bit surprised to get the fastest time by quite so much.”

Although the 37km test was held in wet conditions, Mullen admits the race profile played to his strengths against the clock. The course was really well suited to me. It was a little bit rolly, with a few bits where you had to press on and a few bits where you could recover.”
Despite taking fastest time on the night due to a UCI technicality Mullen had to settle for the U23 title, with second placed Hutchinson taking gold in the elite championships.
“It would have been nice to get the elite title and get a nice jersey made up but you can’t be too greedy. I’m another year stronger. I’ve pulled a few more watts out of the bag. It’s a good bench mark to start working towards the worlds now; a good test to see where I’m at so I can’t complain with the U23 win.”

Whilst there is no doubt on Mullen’s talent, his win has also showcased the 2015 Vitus Chrono2 as the fastest bike in Ireland adding to the professional wins of Vitus Bikes backed Pro Ironman Lucy Gossage who has already taken the IM Lanzarote title and a 2nd place at IM South Africa this season.
An Post – Chain Reaction Team Manager Kurt Bogaerts comments
“We’ve worked with Vitus in the run up to this season to get the ultimate TT bike. Last week we worked hard setting up Ryan’s bike with DI2 and fine tuning his position to ensure he was as aero as possible. I’m very happy to have the Elite Irish TT Champ on the team!”
Ryan Mullen U23 National Champion 2014
37km – 23.01 miles in 44mins 11.11 secs (50.24kph – 31.24mph)
The Irish National Champs continue this week with Vitus riders Amy Brice aiming to take the Women’s title on Saturday and An Post-Chainreaction squad gunning for a victory in the Elite-U23 road race in Mutyfarnham on Sunday.