Having achieved several top ten finishes in The Tour of Britain in the past, Bennett came a close second to Gerald Ciolek in Kendal on Monday, before going one better in yesterday’s thrilling stage. 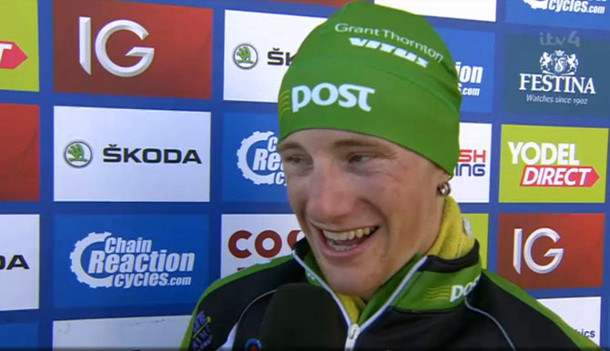 Speaking at the post-race press conference, Bennett spoke of his delight at taking the victory:

"I didn't expect to get second the other day so that was a great result for myself and to get first place today is unbelievable, I can't believe it.”
The 22 year-old had the legs over Michal Golas (Omega Pharma-Quickstep) after he fought hard to keep his place in the select group of around 15 riders that formed over the two ascents of Caerphilly Mountain.
"It was a real hard fight coming into the finish but I knew if I hung on up the climb that I would recuperate quick enough for the sprint," Bennett said at the finish. "It was a bit of a gamble going into the last corner, I went a bit wide, but I had enough acceleration to take the win."
"It is confidence building, I was on his wheel and then it was getting a bit tight and I looked back and it was being really controlled behind so I thought I was better off not going to deep this time around and dropped back so I could go at my own tempo. I got over it that time and then next time around just hung in. I was just trying to stay on Sky's wheel or as close as possible to it as I knew they were going to do everything for Brad to keep him safe and sound. I was hanging on there and knew if I got over with them I'd get some places because it's a descent down to the finish and I was able to recover.
“I could see IAM had three guys there and I thought they were going to do something but with 1k to go they all came together and I tried my best to get onto a wheel. Then coming into the last corner, one guy went and I think I was behind a Quick-Step rider [Michal Golas] who was on his wheel, we ran wide in the last corner, it was a bit touch and go there. We came out of the corner and I hesitated a little bit then saw 100 to go and thought 'Right I'd better not wait around too long' and had good enough legs to sprint.
“I knew coming here that I was going to be in the shop window and really wanted to show what I'm made of. I've been aiming for this for a few months now, trying to get consistency. I have consistency now at the minute and hopefully now there's more to come."

Bennett has had a fantastic week at this year’s Tour of Britain and we hope there is plenty more to come. Having been selected to represent Ireland at the upcoming Elite Road Race World Championships he is certainly one to watch in the coming weeks.

Watch the final race to the line: