Will this be the year that will see An Post – CRC’s Ronan McLaughlin hit it at the Ras?

Whilst Sir Bradley and the Sky Team are keeping us all glued to the action at the Giro this weekend Sunday (19th May) see’s the start of Ireland’s biggest bike race, The An Post Ras.

“The Rás” is an annual, eight-day, stage race around Ireland. The race is Ireland's number one cycling event and is an epic race which began in 1953 and has been held annually since. As one of Ireland’s top sporting events, with daily television coverage bringing world class sporting action the race see’s an amazing mix of Pro teams and County riders go head to head.

For Ronan McLaughlin The Ras means an awful lot. With the race being held in his native country of Ireland the spotlight is on the County Donegal man as he also rides for the races headline sponsor An Post. We catch up with Ronan as he prepares for the race.

Ronan you’ve spent six seasons now with An Post – Chain Reaction which is pretty rare for a Pro. You clearly feel at home with the team?

Yeah, i have to say I feel really at home in this team. For me it’s a massive honour to be riding on Sean Kelly's team and on top of that, to be associated with An Post, which is a very Irish brand and ChainReactionCycles, the largest online bike store in the world, means I wear the Jersey with real pride.
Also the racing program we have here is really important to me. We have a fantastic calendar with a schedule that rivals many Pro Conti teams in terms of racing at a really high level all over Europe.

This weekend see’s the team come to Ireland for the An Post Ras – a race which means a great deal to you. How do you feel coming into it?

I am really looking forward to the upcoming An Post Ras. It’s the biggest race of the year in Ireland and is now the only UCI race there. Both these factors make it a really important race for the team and every Irish rider. Being on an Irish Pro team and mostly racing abroad means that getting the chance to do an international race on home roads is massive for me and I’m really motivated to ride well.
After going really close to a stage win, to achieve a stage victory is my goal going into this year’s race. I feel I am coming into perfect form in time for the Ras and really just can’t wait to get to the start line.
At the moment I am tapering down my training for the start of the race and this is always the hardest period for me, lots of lying around doing nothing and counting down the hours to get started makes for long boring days!

It’s been a race of highs and lows for you in recent years with you playing an integral part of (then) teammate Gediminas Bagdonas’s win in 2011 and last year you having an epic ride on Stage 4 going clear 70km from the finish but were sadly caught 100m from the line. Do you feel this is your year?

I have had an interesting couple of years at the Ras, 2011 was fantastic, to come into the race for the first time with the An Post team and ride so well to help "Gedi" win, controlling almost half the race was pretty epic and a great achievement.

Last year was a different experience, the race took in a lot of my home roads in Donegal and I was obviously very very motivated to perform. I came so close to a stage win into Bundoran and was in two more breakaways later in the race.
I was in fantastic form and performing well I was just lacking a little luck, so despite being very disappointing at the time, these performances helped me reach a new level of dedication and motivation and taught me a lot about myself.
Using this new level I have put in my biggest winter of training ever and have already seen some results this season in races I wasn't achieving results before, so I believe this could be a really big year for me, all I need is a little luck on my side. 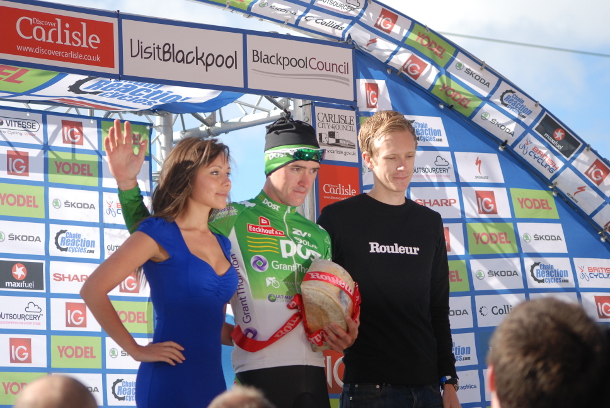 Looking forward to the rest of the season, what are your goals? Does the Tour of Britain feature there?

After the Ras my next goal is the National championships. To be Irish National Champion would be a dream come true. After that I plan to have a slight break before building up for the second half of the season. The team have some really good racing in August and I hope to use this to build my form to have another crack at the Tour of Britain.

I love the Tour of Britain and love being in the breakaways there. It is one of the biggest races of the year for me. Last year on the stage to Blackpool, I was one of the strongest in that breakaway and that gives me the encouragement that when I get in a breakaway that stays to the finish, I have the ability to win a stage, and that would be fantastic.
Also last season I was selected for the Irish team in the World Championships – the biggest achievement of my career so far, but I feel i had an invisible race, my job on the day was to support Daniel (Martin) and Nicolas (Roche), but I didn't have much to do. I'd love to go back this year and bury myself to really play a big supporting role for Dan, Philip and Nicolas in an attempt to bring a rainbow jersey to Ireland again.