An Post-Chain Reaction divide and conquer in Belgium

With the Omloop Van het Wasstland in East Flanders and the start of the Kattekoers in West Flanders the stage was set for an exciting day in the saddle. 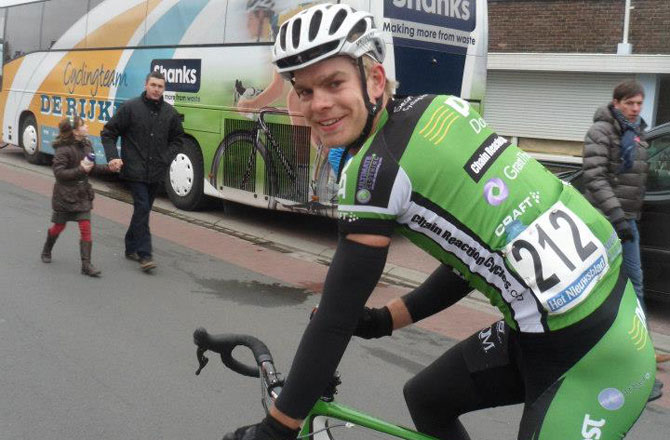 Sunday saw the An Post – CRC team riding in two races on opposite sides of Belgium.
With the Omloop Van het Wasstland in East Flanders and the start of the Kattekoers in West Flanders the stage was set for an exciting day in the saddle – especially given the snowy weather.
The team has a rich history in both of these races with Nico having won in Waasland four times and the team winning the Kattekoers with Roy Jans who has since moved on to Pro-Continental on the back of such results.
Despite good weather in Belgium, the riders woke up to a layer of snow and a brief flashback to winter. With mixed feelings about racing in this type of weather, unsurprisingly it was Co. Donegal rider Ronan McLaughlin who remained upbeat about the day. “I don’t exactly love these conditions but I can go well in them so I’m motivated for today,” he said.
The Kattekoers is a typical Flemish Classic race with a 70km berg zone including two ascents of the vicious Kemmelberg. With the combination of steep climbs and windy conditions, the race winning move could well be made in this section. DS for Kattekoers, Andy Van Hout, warned the riders before the start to save their legs for this section and to ride as a team at the front of the peloton before the first climb.
As expected at the first proper climb there was a break with the team represented by Alphonse, Ronan and Wout. Alphonse has said before the start that he was very motivated for the day’s race in his homeland of West Flanders and that he’d gained confidence from his second place finish on Wednesday in the Wanzele. Both Ronan and Alphonse rode strongly with both riders pushing the pace at the front staying safely in the splits every time the group was whittled down from the original 30 to finally just eight riders after the last ascent of the Kemmelberg.
The group of eight rode well together, increasing their lead in the last 10km where the inevitable attacks started. Both Ronan and Alphonse tried to give their breakaway companions the slip but to no avail. In the final 3km Jermoe Baugnies broke from the group quickly making a break of 20secs which he held all the way to the line to take the win. Ronan made a move inside the last kilometre to set up teammate Alphonse for a slingshot sprint finish which worked perfectly taking him to a win the sprint and second place on the podium. Ronan rolled in behind in eighth place. 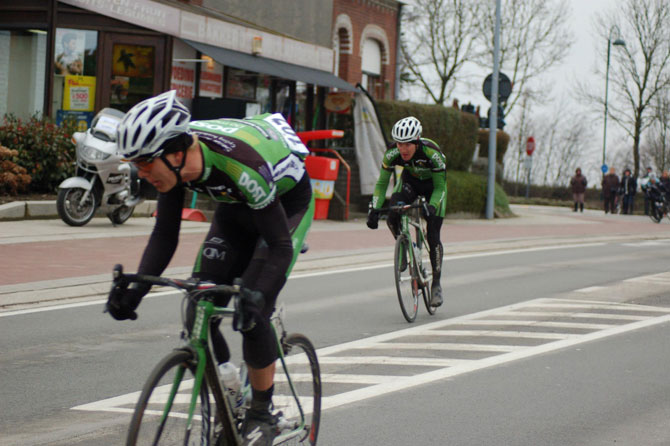 Ronan commented after the race that he was cramping in the last three kilometres and wasn’t able to push as hard as he would have liked to chase down the leader. Without a good sprint himself he decided that the best thing to do was to set Alphonse up for second place.
In the bunch sprint Mark McNally led Nicolas Vereecken out, making it three An Post-Chain Reaction team riders in the top 10.
Over in East Flanders the team put down a similarly impressive performance.
Racing over a mainly flat course of 190km the only challenge would be the wind and cobbled sections. With the first 90mins getting off to hectic start the race was full-on with a lot of attacks before a break finally got a gap.
Team rider Steven Van Vooren slipped into this break and was showing promising pace before being finally caught back in the finishing laps. Niko Eeckhout had a lot of bad luck crashing twice in the early stages and then also puncturing twice. With the help of his teammates Jack Wilson and Kieran Frend he managed to regain contact with the bunch each time and despite his bad luck showed true grit and determination by getting into the next break after Steven’s earlier move had been caught. The break of seven riders proved to be the race winning move and Nico was in a strong position to add to his previous wins. 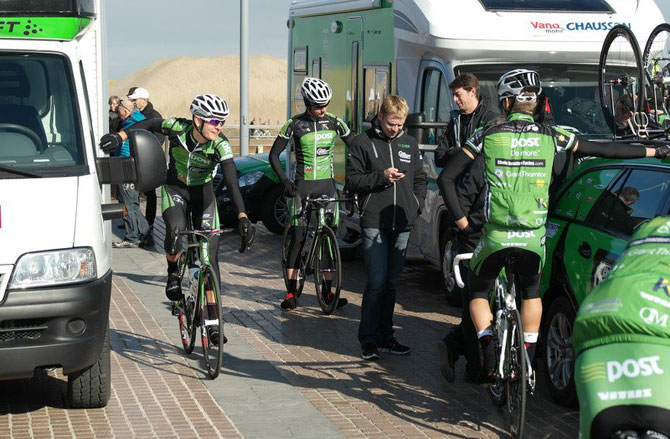 With the break remaining clear, it was a sprint finish amongst the small group to decide the race win. In a very tight burst which needed a photo finish to decide, Niko was just edged out on the line by Topsports Vlaanderen’s Pieter Jacobs who took the win.
With seven riders ahead the bunch was also left to sprint it out for eighth place. An Post-Chain Reaction’s Jack Wilson and Glenn O’Shea made a huge effort in the closing stages to set teammate Sam Bennett up for the sprint and he repaid them by taking a solid 10th place. Jack was impressive again riding very well all day and following moves into 33rd place. It’s been a promising start to the season for the Northern Ireland-born teenager.